Meet our team of amazing guides.

Amy is the founder of FIFTHclass. She has been dubbed by John Long as “the high priestess of the High Sierra” and strives to live up to the title. Living in the area for more than a decade, Amy has spent thousands of hours exploring all the hidden gems the area has to offer.

Miranda grew up in Maryland and has been passionate about rock climbing since she started in the climbing gym as a teenager. Less than a week after graduating in 2006 with degree in International Studies at St. Mary’s College of Maryland, she packed up the little gear she owned and made her way out west to work and live in Yosemite National Park. 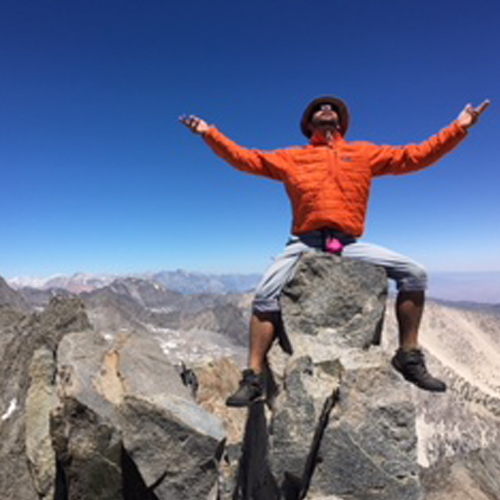 Aaron has been a guide in Yosemite for many years, taking both beginner climbers on single pitch climbs and helping seasoned climbers reach their goals of climbing big-walls.

With over fifteen years’ experience climbing and mountaineering, Amy has climbed some of the biggest rock walls in the world, including El Capitan and all three towers of Torres Del Paine in Patagonia.  After devoting over a decade to establishing first ascents on large rock walls, she is now more inclined to push it sport climbing, occasionally throwing down some big mountain/trad missions or bouldering on the side.

She is an AMGA Aspirant Guide, has training from AIARE, and is a Wilderness First Responder. Amy also works as Lead Safety for Running Wild with Bear Grylls and occasionally works with other productions doing rigging, scouting, and safety.

Throughout her time in Yosemite and other world-renowned climbing destinations, she has grown to become an expert in traditional free climbing and an elite technical big wall climber. Miranda has climbed Yosemite’s El Capitan over 20 times. In 2014, she climbed the Regular Northwest Face of Half Dome and The Nose of El Capitan in less than 24 hours. In 2016, she became the first woman to rope solo the Nose in less than 24 hours. She has done first ascents in Patagonia, the High Sierra of California and the Coastal Range of British Columbia in Canada. She loves pushing the limits of traditional free climbing, onsighting up to 5.13 on gear.

Miranda is a certified Rock Guide through the American Mountain Guides Association and Wilderness First Responder and is bilingual, fluent in Spanish and English. Outside of climbing, her passions include writing, traveling and sharing climbing with others.

Climbing since 2001, in Yosemite since 2003. Aaron is an AMGA certified Rock Guide. Accomplishments include 40 ascents of El Capitan and over 70+ big wall ascents. Solo ascents of Nose on El Cap in 20 hours and Zodiac route in under 13 hours. Extensive alpine experience including solo ascents of Torres del Paine in Chile.  While his climbing resume is extensive, his laid-back attitude and joy of fishing, hunting, and just being in the mountains is what keeps him happy in the guiding world, and in life. 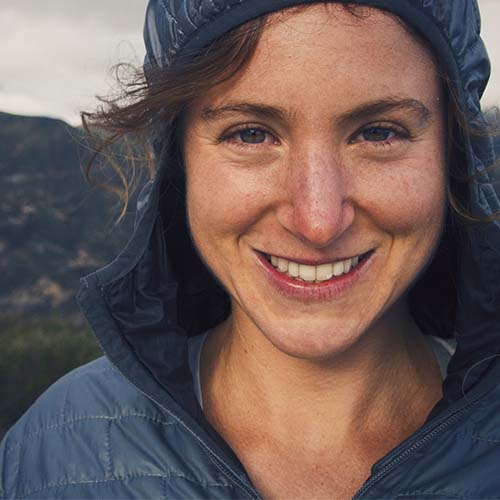 Born in the French Alps, and raised in the California Sierras, Sonia grew up with a passion for movement, connection and nature. When she did her Yoga and AcroYoga teacher trainings in 2007, she had no idea that she would still be in this work so far down the road. Yet these practices have given her a home, friendships around the world, and tools to find balance and joy. 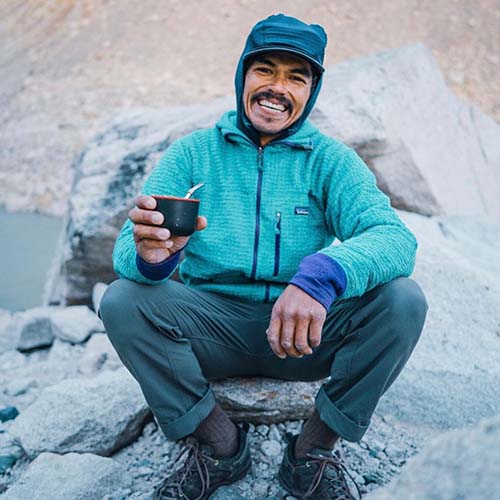 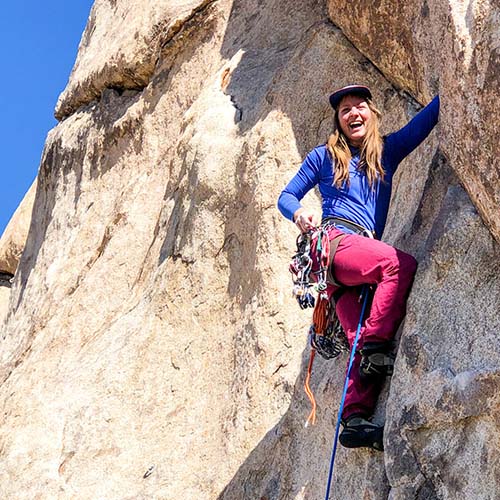 Originally from Southern California, Jo started climbing in College at Mt. Lemmon outside of Tucson, AZ. In 2014 she fully changed her life to revolve around the sport. Working for Mesa Rim Climbing and Fitness as a coach and route setter, she continued to build her outdoor climbing resume and dive into the guiding world. In 2016, Jo received her SPI certification, and has since become an AMGA Assistant Guide.

Based out of California, she teaches both locally and internationally sharing her passion for yoga, acrobatics and Thai massage, as well as organizing camping and climbing retreats in nature, perhaps her biggest source of inspiration. When not teaching, you will likely find her climbing up a mountain. You may find out more about her and what she does at www.yogasquirrels.com.

After living out of a variety of vehicles and traveling across the country in the pursuit of adventure and expanding her knowledge in the outdoor industry, Jo was able to refocus her energy back to California in 2020, where she has been growing as a Lead Guide and Program Coordinator. Her passions revolve around teaching self sufficiency to those looking towards developing as a climber while holding onto the responsibility of doing our part to be good stewards of our outdoor spaces. When she’s not sharing her passion with others, she can be found in the mountains continuing the never-ending exploration or working on miscellaneous handyperson projects.

aloma grew up in Seattle, Washington where she discovered her passion for the mountains through family backpacking and climbing trips in the Cascades. In 2017 she traveled to South America and fell in love with the granite towers of Patagonia. Since then she has split her time between Patagonia, Chile and the Pacific Northwest. She has been working for the past four years as a bilingual climbing and hiking guide.

Paloma spends as much time as possible climbing and some of her favorite areas are Patagonia, the Peruvian Andes, the Cascades, Indian Creek, the Wind River Range, and the High Sierra. When Paloma isn’t pursuing her own climbing goals she finds fulfillment in sharing her passion with others and teaching the skills necessary to be self-sufficient in the mountains. She is currently certified as an AMGA Apprentice Rock Guide, Wilderness First Responder, AIARE Level 1, and Leave No Trace Trainer. 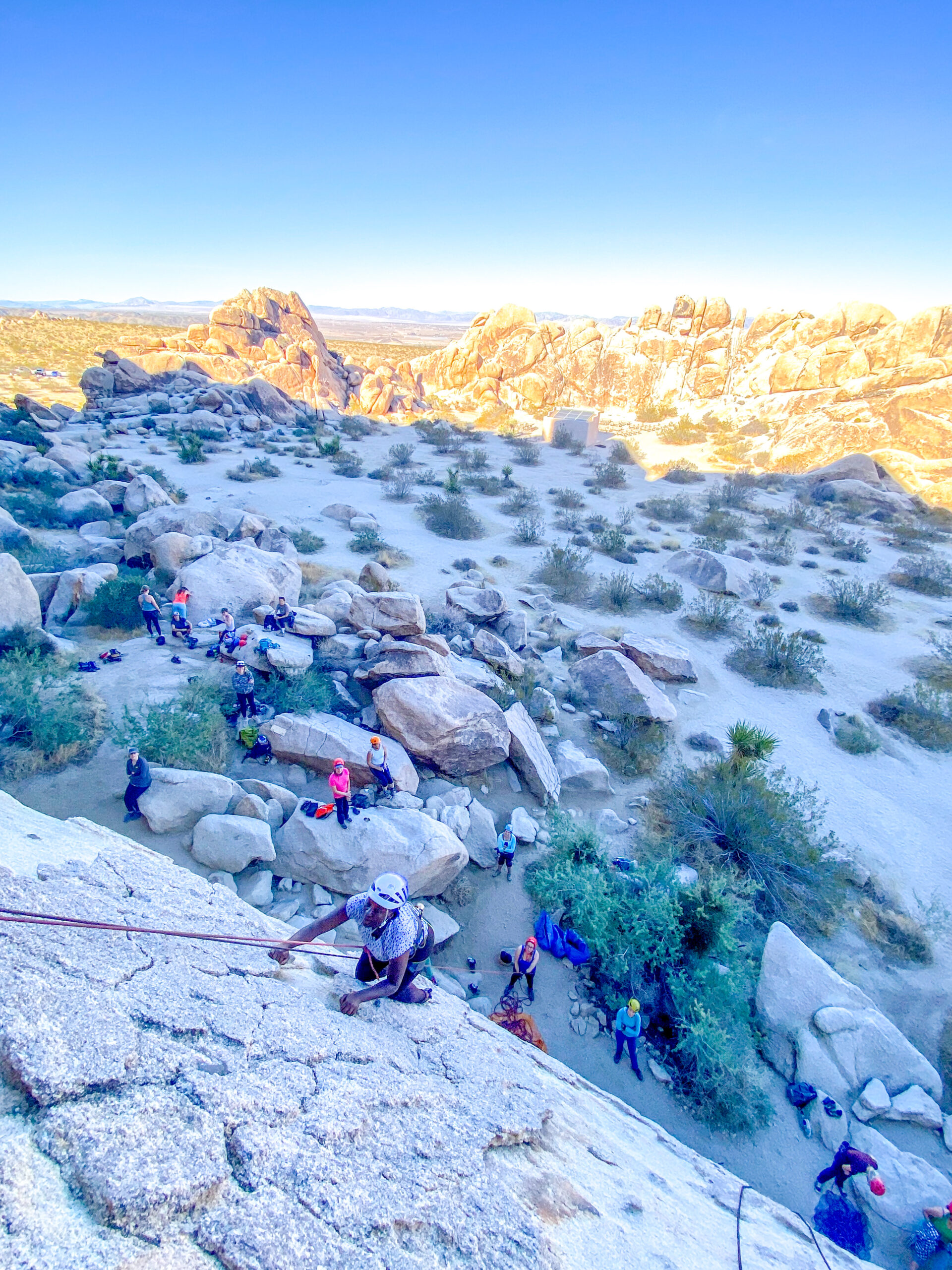 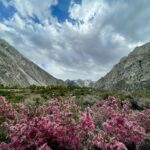